It’s been a brutal year so far in the cryptocurrency markets. Among the bearish developments, there are a slew of centralized entities that have declared bankruptcy, the most prominent of which was Celsius.

In this context, the mantra “no keys, no coins” rings truer than ever. As contagion spreads through the industry, there is only one way to be absolutely certain that your Bitcoin (and other cryptocurrencies) are safe. And that’s cold storage – something I warned about the day the UST peg started slipping.

For example. #Bitcoin may be the safest money in the world, but only if you have your keys.

Is your escrow lender definitely not tied to. $UST?

There might be more than Terra in the background, this is not over.

A few months later, we’re still not out of the woods, despite the initial wave of bankruptcies already in the rearview mirror, including Celsius, Voyager Digital, Three Arrows Capital.

Today I write a review of the hardware portfolio. BitBox02. In order to make it as simple as possible, this will be an objective review of the portfolio describing its advantages and disadvantages.

Manufactured by Swiss company Shift Crypto, the BitBox02 wallet retails for $128. The version I’m testing stores multiple assets, including Bitcoin, Litecoin, Ethereum and ERC-20 tokens. However, for Bitcoin fans who get sweaty just reading the word “Ethereum,” there is also a Bitcoin-only version. It sells for the same price of $128.

In the box there are several items. First, the wallet comes with a USB-C to USB-A adapter, so it’s not a problem if your laptop is too old for the now ubiquitous USB-C slots. It also comes with an extension cable, which allows you to plug the device into your laptop while holding it in your hand, connected to your laptop via the cable. It’s far from necessary, but it’s a nice option.

Finally, there is a clasp that allows you to hang the device on a keychain, belt or whatever you want. There is also a microSD card in addition to the hardware wallet itself.

How to use the BitBox02

First, I downloaded the application from. https://shiftcrypto.ch/app/.

Next, I inserted the backup microSD card into the device. The purpose of the microSD card is to back up your wallet in case of loss or damage. There is also an excellent but simple function to set a universal 2FA option, a bit of security.

On the app screen, I clicked “Install firmware.” Also, nice touch: you can click “flip screen” and it flips the screen to the wallet, which makes it easy to read (I only have a USB-C port on one side of my laptop). Next, check that the code on your BitBox matches the code on your laptop screen.

I clicked on “Create a wallet.” 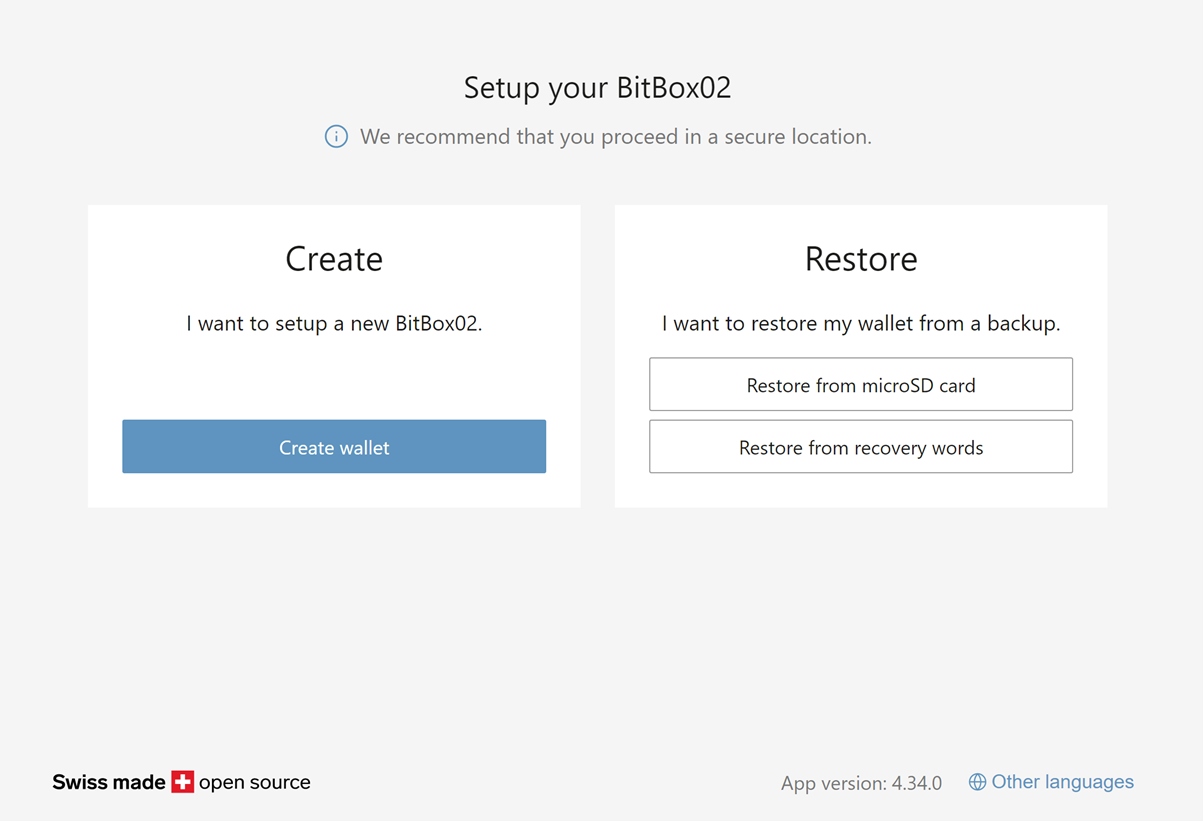 I have to enter a password. To do this, invisible touch sensors are used on both sides of the device. This is a really cool feature, and probably the most notable feature of the wallet. You can touch and hold the sensors to perform any action on the device. It adds a nice futuristic touch to the whole thing.

When setting the password, the operation of the sensors takes a bit of time, as you have to press each button several times. So there was a lot to understand and it is quite tedious. However, the process is intuitive and becomes easier once you get used to the settings. Apart from the password – which is handy – the sensors work very well.

The app options are excellent. I can set up a 2FA, manage my backups, view my wallet balances, look at my transactions… all the basics, in other words. It’s minimalist and easy to navigate, which is what I really need for a wallet – I don’t need my cold storage wallet to have a shiny interface on par with the best-built websites on the Internet. 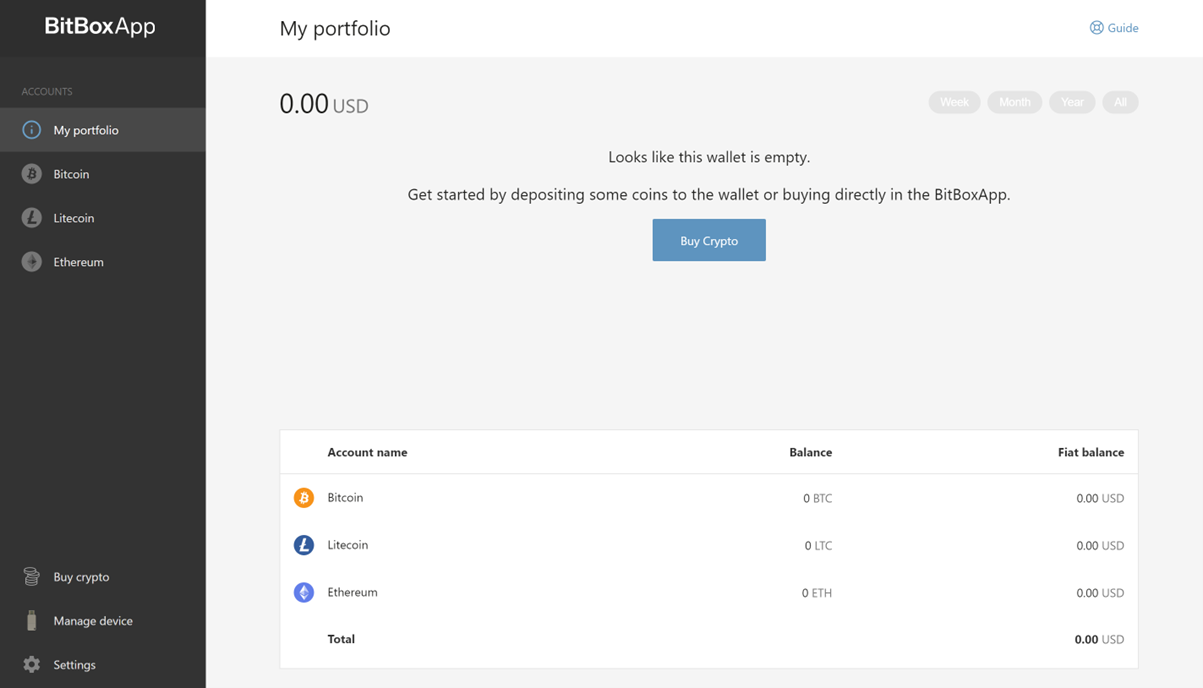 I then send Bitcoin to my device by easily scanning the QR code on the app. Unfortunately for me, this was the Bitcoin I had left over from my recent trip to El Salvador – perhaps I was too ambitious with my expectations of how many merchants would accept Bitcoin there – but I can’t blame BitBox for that, can I? So my $360 worth of Bitcoin goes into the hardware wallet.

That done, I’m sending it back, just so I can tell my dear readers what it’s like to retire too (the things I do for you!). Well, that’s… easy. There’s not much to say. You type in the transaction and, via the device’s touch sensors, hold down the (invisible) buttons to sign the transaction.

The BitBox02 doesn’t do much, but it does everything well. It stores your Bitcoin well. It is simple to set up, even for those with no prior knowledge (I tried it with my friend, who said the getting started guide was excellent).

Signing transactions couldn’t be easier. The option to save to microSD card (which is totally optional) is also excellent. And the 2FA option is something I like.

In conclusion, at $128, this wallet does exactly what it needs to do and I really don’t see anything to dissuade people from buying it. In the current climate, it is vital to own your coins if you intend to hold them for a long time or own a significant amount. Faced with the myriad potential drawbacks of not keeping your coins in the cold, a $128 investment and 10 minutes of your time to set it up are drops in the ocean.

Of course, if you only have a small amount or don’t expect to keep your cryptocurrency for a long time, the more secure exchanges are fine. But if you don’t, cold storage is simply safer, easier and more sensible. The BitBox02 is designed for exactly that, and it delivers.

Finally, it’s open source, which is great. And kudos to whoever decided to include stickers on the box.